Over the past couple years, since SQL Sentry introduced Performance Advisor for Analysis Services, I’ve heard many people say they see SSAS as a “black box” on their servers with no real visibility into troubleshooting performance issues. Performance Advisor (PA) lifts the shroud from Analysis Services, but for some it may not be obvious how to interpret all the information gained from this new visibility.

There are many resources out there that cover OLAP architecture and MDX, but much less in the way of an explanation to all the various metrics that are available and how they correlate with each other. In response, I developed a presentation I’ve given several times now at SQL Saturdays that I believe serves to “bridge the gap” for DBA’s that may be new to SSAS, or possibly even developers who lack a dedicated administrator and need to be able to tell where the bottleneck might be on their SSAS server.  I was also privileged to be invited to an interview on RunAs Radio where I spent some time discussing this with Richard Campbell and Greg Hughes.

Finally I’ve had the time to put much of this same advice down here. This is the first part of a couple posts I’ll dedicate to the topic. Anyone working with SSAS should find this useful, but users of PA for SSAS should find themselves even more proficient in troubleshooting SSAS performance issues. We’ll start with a very basic introduction to the service itself and how a query is handled, and move into specific metrics and identifying bottlenecks shortly.

It’s important to understand that SSAS is its own engine. The executable is msmdsrv.exe. It’s licensed with SQL Server, but in large production environments you aren’t likely to be running it on the same machine as a SQL Server. There are two primary types of activity that occur here; querying and processing.

Querying can be done by various methods, but the most common type of queries are Multidimensional Expressions (MDX). This is just a standard language, similar to SQL, optimized for calculations. I won’t go into the how’s and why’s of MDX itself as there are many resources already available on its mastery. While this series won’t tell you how to write MDX, by the time we’re done you should be able to tell, with a few basic pieces of information described later, whether there is room for query optimization or if the bottleneck lies elsewhere.

Processing is essentially the maintenance activity of your cubes. It’s how cubes are created and updated with new data and/or how existing data is recalculated and reorganized. Just as with SQL Server, what level of processing you perform and when is essential to ensuring proper performance without interfering with peak querying times. We’ll dive into those options later.

Under the covers there are two primary “engines” within SSAS, the Formula Engine (FE) and the Storage Engine(SE). The FE accepts MDX requests and parses the query to process. It will send requests to the SE when data is needed. It then performs calculations on the retrieved data to provide a final result set. An interesting thing about the FE is that it is single threaded. If you are watching the CPU’s of your multi-core server with SSAS while a request is being handled and you only see one core spike, it’s probably because the FE was doing the work at that time.

The SE on the other hand is multi-threaded. The SE reads and writes data to and from the file system for the server. This can include working against the Windows file cache. This is an important distinction between Analysis Services and the relational engine in SQL Server. SQL Server’s relational engine has an internal cache, and then goes to disk for any other needed IO. It does not utilize the Windows file cache for database files. SSAS, on the other hand, does. This means that when SSAS is interacting with the file system on your server, it does not necessarily mean this will result in physical disk IO. SSAS utilizes its own caches as well as the file system cache to get what it needs.

So how does SSAS cache data? Each engine within SSAS has its own set of caches. The FE caches store flat values (the Flat Cache) as well as calculated data (the Calculation Cache). It’s important to understand that these caches are often scoped, which means the data might only be available for a limited time or only for a particular user, even in cache. The flat cache in particular is in fact restricted to a max of 10% of the TotalMemoryLimit property in SSAS, which we will discuss later.
So, that said, when we talk about SSAS cache optimization, warming, etc., we are more often dealing with the SE caches. I know that’s a bit of a simplification, but this is an introduction after all. ;)
So the SE consists of a Dimension Cache and a Measure Group Cache to store the data retrieved from the corresponding sources in the file system itself.


Anatomy of an MDX Query 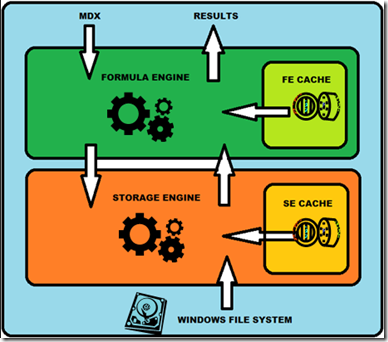 So now that we understand the basic components under the covers in SSAS, how are they used to handle a request? First, the query is accepted and the FE parses it. If the appropriate data is already available in the proper scope in the FE cache, some or all may come from there. The FE then requests any other needed data from the SE. The SE then retrieves whatever it can from its caches. If still more data is needed, the SE queries the file system on the server. The data from the file system may, at least in part, come from the Windows file cache. Remember we mentioned this distinction earlier. Anything else results in physical disk IO. These steps may be iterated as needed while data is moved from SE caches to FE caches, etc., but you get the picture. Another graphical representation of this process can be found in Appendix A of the Microsoft Best Practices Article “Identifying and Resolving MDX Query Performance Bottlenecks in SQL server 2005 Analysis Services”, authored by Carl Rabeler and Eric Jacobsen. I highly recommend reviewing this article for a very in-depth look into this topic. Even though the title mentions SQL Server 2005, it’s still very relevant and useful.


What can impact MDX performance?

So now that we have a good understanding of how SSAS handles MDX requests, the question we need to answer is, “What can impact MDX performance, and how can we tell”? That is the question we will answer in the next post.
Posted by Steve Wright at 2:52 PM